Smith County is southern hospitality with its beautiful scenic countryside, rural roads that wind around majestic hills, rivers, lakes and creeks with great fishing and hunting. It is home to the best food that you will ever put in your mouth and the quaintest and most serene places to visit and lodge. We welcome you to visit with us to relax, take your time and really look at the area’s natural beauty.

In 1789, William Walton, our first settler, chose this spot of land in redemption of his land grant and built his home on the north side of the Cumberland River, opposite the mouth of the Caney Fork River. When, after a heated election featuring the “bear meat and spirituous liquors,” Waltons Ferry was chosen as the county seat, Walton deeded 50 acres in exchange for $1.00 to the commissioners who in turn sold lots with the proceeds being used for erection of public buildings.

By decree of the State Legislature the new town was to be called Carthage. In 1806, a post office established. By 1879, “the largest and most elegant brick courthouse … within the state of Tennessee” had been constructed. The county is known for this Second Empire-Style Courthouse.

As Indian treaties opened up the land that is now Tennessee for settlement, settlers rushed in to clear farms and establish communities. The new inhabitants sought protection for life and property and other benefits of government courts of law, militia organizations, and legal title to newly acquired land. Counties were quickly organized once migration into the frontier region had begun. Access to the seat of government was a main difficulty for the pioneers, since it was necessary to travel to the county seat to conduct legal business or present oneself to the court.

Over time, residents in areas remote from the county seat would petition the General Assembly for a new county centered closer to their homes. The area of land that Smith County consisted of in 1799 was much larger than that of present day Smith County. Since its organization in 1799, seven other counties were organized from land that was originally part of Smith County. These counties are Jackson (1801), White (1806), Warren (1807), Cannon (1836), Macon (1842), Putnam (1854), and Trousdale (1870). This process of carving counties out of the land began in the 1780s and ended a century later.

The majestic Cumberland River is an integral part of the history and growth of the county. The first settlers sent their products to market by flatboat or keelboat. With the coming of the steamboats in 1820s Carthage, Rome and Dixon Springs became thriving towns on the river. In those days, Carthage had three ferries providing transportation across the river and elegant hotels providing food and lodging for the travelers. In 1906, a toll bridge was constructed abolishing the need for ferries. On May 3, 1936, traffic was opened on the sparkling new Cordell Hull bridge. As hundreds of saddened and curious onlookers lined the banks, the old toll bridge was toppled into the river.

Smith County has always been rural and agricultural – the traditional “hog and hominy” economy. Corn was the chief crop grown for livestock and could be converted into whiskey for cash for the farmer. The cultivation of tobacco was introduced early and continues to be the major cash crop of the county.

Early industries in the county were those connected with the farm and forest. The grist mills, distilleries, sawmills and tanneries were developed from the necessity of converting crops and goods into marketable products. The limestone caves were rich in saltpeter used in making gun powder. The rivers yielded rich deposits of mussel beds which were gleaned for the coveted Cumberland River pearls they produced, many being sold to Tiffanys of New York. “Split Silk” flour, “Natural Twist” tobacco twists, Bilbery-Welsh spokes and hogsheads were only a few of the Smith County industrial products on the market in the 19th century.

The names of those Smith Countians who have died while defending their country are etched in stone on the memorial monument on the courthouse lawn. The Revolutionary War was history when Smith County was created in 1799, but many of the old veterans of that war settled, lived and died in the county contributing much to the development of the area. Their patriotic zeal was evident when, during the War of 1812, they formed a Home Guard, freeing the younger men to march off to do battle. Two companies of Smith County soldiers fought in the Battle of New Orleans under the command of future president Andrew Jackson. Four companies of soldiers were raised in Smith County for service during the Mexican War. During the Civil War, twelve companies or an estimated 1200 Smith Countians served in the Confederate Army. No companies were formed in the county, but some Union sympathizers joined forces with the Federal Army.

Hundreds of people from over the county gathered in Carthage to bid farewell to the first draftees leaving for the training for World War I. Many Smith County boys made the supreme sacrifice in this terrible conflict, and many others received traumatic effects from the poison gas used for the first time during warfare. At the advent of World War II, it was declared in The Carthage Courier that “the people of Smith County can do it if we take a notion, and we’ve got the notion… and we are in this fight to the last man.”

The railroad also brought income and development into our county giving us thriving little towns such as Lancaster, Hickman, Brush Creek, Sykes and Gordonsville producing numerous jobs for our people then and now.

The building of Interstate 40, which follows close to the same route as the Walton Road that was literally hacked out of the wilderness of the Cumberland Mountains under the direction of William Walton, has contributed significantly to the growth of our industries.

Carthage, the county seat of Smith County, is situated on the north bank of the Cumberland River approximately one mile below the junction of the Caney Fork River. It is perhaps the oldest established county seat in the 14-county Upper Cumberland region. Established in 1803, according to Dr. J.W. Bowen in Smith County History, Carthage’s name and location were a matter of grave dispute for 50 years or more. The name “Carthage” was chosen for the town by the State Legislature. The name was no more than “that the lawyers in the legislature wanted to impress people with their knowledge. So they named towns such things as Engima, Rome, Carthage, etc.”

William Walton, famed builder of Walton Road and Smith County resident, donated 50 acres of land in exchange for $1.00 to the commissioners who in turn sold lots with the proceeds being used for erection of public buildings to the County to begin the town. In 1806, a post office established. “Carthage, soon after it was located, attracted the attention of not a few men of enterprise and business experience. Situated on the banks of the Cumberland, a stream of rare beauty, near the mouth of its largest affluent, itself a river of no mean proportions, in a region of unsurpassed fertility, it was not unreasonable to expect it to become a place of commercial importance.”

By 1879, “the largest and most elegant brick courthouse … within the state of Tennessee” had been constructed. The county is known for this Second Empire-Style Courthouse.

Smith County is home to three major towns. Below you’ll find some basic contact information and links to view community data on each. 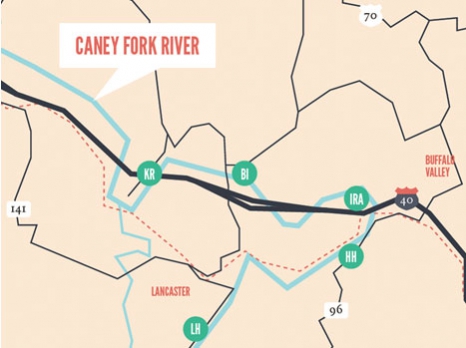 The Caney Fork is a river that flows through central Tennessee in the United States, draining a substantial portion of the southwestern Cumberland Plateau and southeastern Highland Rim regions.[7] It is a major tributary of the Cumberland River, and is part of the Cumberland, Ohio and Mississippi basins.

The Bearwaller Gap Hiking Trail is located between the Scenic Overlook (at Tater Knobb) and the parking lot at the Defeated Creek Campground picnic shelter. 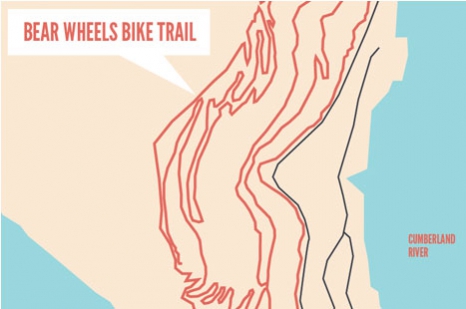 Bear Wheels Bike Trail is a new addition to Cordell Hull Lake. It is located in Defeated Creek Park next to the Bearwaller Gap Hiking Trail entrance and the campground. The entrance of the trail features a convenient parking area. The trail consists of two loops – Black Bear and Grizzly Bear.